My recent attempt to set the fastest known time (FKT) on the 100 mile wilderness was not the first but thankfully for me and my longsuffering wife it would turn out to be my last. Setting a speed record on the 100 mile wilderness had become somewhat of an obsession. I grew up in Maine and when I started running ultramarathons, I always wondered if I'd graduate the the 100 mile distance. Even before I was aware that FKTs were a thing, I used to dream about running the 100 mile wilderness.  I first took a shot at the record on an absurdly hot day in July of 2019 and decided to stop after passing out at an aid point on Johnston road (my wife has terrible memories of watching me pitch forward face first into the dirt). The next year I tried again but I broke a big toe about 10 miles in. An FKT was out of the question but I wanted to finish so I hobbled through to Abol bridge in just under 35 hours, completing my first 100 mile "run" in the process. Two additional attempts followed, but both were ultimately derailed by GI issues. As I weighed my 5th and ultimately final attempt, I knew full well that my chances of success were not great. My training regimen over the summer had been minimal. With 3 young children, a puppy, a farm in the early stages of rehabilitation, and a full-time job as a physician, training for a 100 Mile Wilderness FKT just couldn’t be a priority. The most I had run in a week all summer was 31 miles.

I did have two big things in my favor though: familiarity with the trail and my wife Christy, the one-woman support crew of my dreams. I knew exactly what to expect and how to plan for each section of the trail. Christy knew how to access each road crossing and expertly meet my physical and emotional needs.

One thing that was different about this run is that I chose not to announce my intentions ahead of time. I appreciate and generally agree with this guideline but for me the announcements had begun to weigh on my mind. I wanted to run without any outside pressure. I figured that I really wouldn’t mind if the FKT arbiters decided to reject my record because of this breach of protocol. This run was much more about a personal and spiritual endeavor than getting some recognition. The FKT was a deeply personal challenge I needed to meet. If I met that challenge I would be fully satisfied whether I was recognized for it or not.

As usual I would run northbound. I knew from my experience with the trail and familiarity with Finn Melanson’s splits that I would need to preserve some energy going over the brutal Barren-Chairback range and the long and undulating climb up Whitecap. I would then spend that energy recouping my time on the much more runnable 13.8 miles between the west branch pond road (bottom of the northern slope of Whitecap) and the Jo Mary Road and try to keep up a respectable pace for as long as possible on the remaining sections of the run. 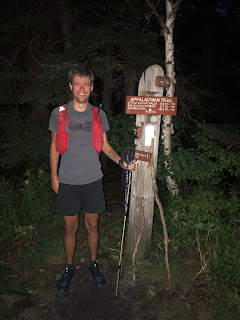 Starting at 5:45am on September 13, 2021, my strategy initially went roughly according to plan. The day was cool and initially overcast and I felt like I was moving well without pushing too hard. Somewhere along this section of trail I met an older guy named Doug who was also aiming to run the 100 mile wilderness. We wished each other well and I headed off marveling at the odds of meeting another runner on this remote and challenging trail.

Christy met me for the first resupply just past the Otter creek lean-to. I was feeling good and was glad to see I was right on pace. Next up was the Barren Chairback range. On this section I tried hard to dial myself back on the brutally steep and rugged climbs but pick up easy speed on any flats and downhills. The weather was sunny now but there was a cool and blustery wind that kept me from getting too hot. By the time I reached Chairback mountain I was still feeling strong and made a quick descent to the KI road where I discovered I was well ahead of my projected arrival. This gave me the confidence I needed to finally take the climb up Whitecap easy. I kept reminding myself that even if I was easily capable of running that long gradual climb, I’d make far more efficient use of my energy by waiting for flatter or downhill terrain. For the first time I was able to make it all the way to the top of Whitecap feeling really good and rapidly dropped down the steep 3 mile descent down to the West Branch pond road where I discovered I was now about 30 min ahead of my projected pace.

At this point my stomach began to gurgle, sending me intermittent waves of nausea. In the past I’ve always kept on eating and drinking as much as possible in spite of the nausea. This time I dialed back my intake and tried listening to my body for a change.

Apart from my GI distress I felt pretty strong. The terrain over to Jo Mary road is relatively runnable and I was able to pull ahead of the previous FKT pace and gain yet more time over my own projected splits as I surmounted little Boardman mountain and tore through the trail leading up to Jo Mary Road. This would turn out to be a good thing because I started to slow down as I made my way over the trail from Jo Mary road to Nahmakanta lake. This section is supposed to be about 15 miles but it felt like I would never get there. My GI issues persisted and I still wasn’t able to eat or drink much at all. I was deep into the run and doing very well overall but I was so tired that running this section 15 minutes slower than I had planned felt like a major blow. Then came the section of trail past Nahmakanta lake. The trail started out with a brief runnable stretch but then it started taking these maddening meanders up and down the slope of Nesuntabunt mountain. These little climbs felt like cruel and unusual punishment in my fragile physical and mental state. By the time the actual climb up Nesuntabunt had begun I was beginning to feel the FKT slip from my grasp. I kept seeing these beautiful rocks that seemed to be calling my name, inviting me to stop this nonsense and rest. Unusually shaped rocks and stumps began to look like hikers, bears, and fantastical creatures. I wasn’t hallucinating exactly but it felt like I was headed that way. My fluid and calorie intake also continued to be frighteningly minimal. My pace had slowed to a crawl. My right quad was beginning to give me increasingly severe jolts of pain.

There’s a little road at the bottom of Nesuntabunt. Christy was supposed to meet me about 2 miles further down the trail at Pollywog bridge but she presciently decided I might need some encouragement. When I saw Christy, I told her I wasn’t sure I could keep going, that the trail past Nahmakanta lake had really broken me down. But Christy told me I could still get the FKT, that she believed in me, that when the going got tough I was the guy that could push through. All I had to do was average a 16.5 minute mile for the rest of the run and I could still get the record. She also said shared encouraging messages from friends and family who had been following my spot tracker and were cheering me on.

“Running” a mile in less than 12 minutes is difficult even on the easiest terrain on the 100 mile wilderness. I had previously tried and failed to maintain a 16.5 min pace between Jo Mary Road and Nahmakanta lake and I knew this final stretch of trail involved more climbing. But Christy’s pep talk fired me up. I started off down the trail still feeling broken but not beaten, not yet anyway. My body might be disintegrating and my knee was making any downhill run look like a grotesque series of awkward hops, but I would find a way. Christy’s belief had reawakened my own belief.

There was no need to resupply anything when I got to Pollywog bridge. I still had most of the calories and fluids I had picked up at the Jo Mary road! Christy did give me some sour patch candies though. As it turned out, these candies and a few cautious sips of water were the only things my stomach could tolerate for the rest of my run.

The hikers I passed on this final section probably thought I was a lot more than half crazy. At times I was bent nearly double with stomach cramps. My right knee became progressively more painful and I would involuntarily yell in pain on the downhills. I grunted and groaned. I exhorted myself aloud—“come on Barry, COME ON, just keep going!” My GPS watch had totally malfunctioned and all it could tell me was what time it was. I thus had no idea whether I was on pace to set a new FKT until I got to rainbow ledges and read the sign indicating I had 6.1 miles to Abol bridge. I looked at my watch and saw I had nearly 2 hours left to get the FKT. I also knew the trail was mostly downhill. If it hadn’t been for my now swollen and extremely painful knee I believe I could have finished these remaining miles in about an hour and 20 minutes, possibly even less. As it was I needed all the time I had. I kept checking my watch towards the end though because I knew this was going to be close. I still wasn’t totally sure I would get it. Finally just as I was starting to really wonder when the road would appear, I met a hiker going the opposite direction who blithely informed me I had just over a mile left. I rechecked my watch. A MILE? I might not make this. I broke into an awkward limping run but thankfully that hiker was massively overestimating the distance. About 5 minutes later I saw the road through the trees. What a good feeling to get on that road and head towards Abol bridge. Christy was jumping and cheering me on. Even with the bridge so close, it took focused and determined effort to keep running until I touched the bridge. I was elated and relieved but so totally exhausted that I immediately sat down on the bridge rail, then hobbled over and sat down on the ground in the shade of our car. I had completed the FKT in 29 hours and 6 minutes, a mere 12 minutes faster than the previous record! 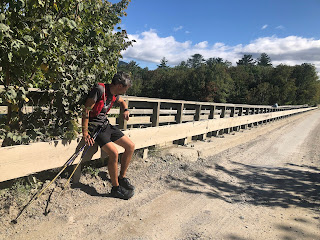 I’ve included my splits below. I didn’t keep track of my resupply times but they were usually less than 5 minutes. The times shown here are my departure times at each point. Road names are a bit tricky in the 100 mile wilderness but I’ve included approximate mileage based on “book miles” as reported in the Maine Appalachian trail guide.

I’ve learned a lot about this trail over the years I’ve spent trying to set the record. Here’s a list for the next prospective record holder (no particular order)