When Barry started talking about running the 100 mile wilderness over 3 years ago, I didn’t know what to think.  I know he loves to run long distances and do crazy hard things, but I must admit I was nervous about the remote and rugged terrain, both for him and anyone supporting him.  I had never even been up in the north woods, except for one hike up Katahdin when we were first married.  At first I thought the resupply points would be few and far between but I quickly learned that, thanks to the maze of logging roads crisscrossing the wilderness, I could meet him quite a bit.  I enlarged and printed out a few maps that I found online.  I printed and wrote out directions on google maps because I knew my phone wouldn’t have service (I learned a better method though - see below).  I peppered Phil Pepin with questions about access roads and directions.  To say it mildly, I was nervous.  The first few times Barry ran, I would rush off to the next road crossing thinking he might show up way sooner than expected and I needed to be there!  But I learned - I learned to take my time, enjoy some hikes, and trust that he wasn’t going to somehow start running a 10 minute mile over Whitecap :P  There was even one memorable time when I took all 3 of our little kids with me and they had a blast sleeping in the back of our small jeep.

One unique thing about this particular run is that because I knew the roads so well, i was much more relaxed and I spent more time chatting with through-hikers.  At the bottom of Whitecap on the KI road, I was surprised to meet two people (Owen and Christina) who were also supporting two runners (Doug and Gwen) who were running  the 100 mile wilderness on that same day.  I couldn’t believe it - the chances of two other people running it on the same day as Barry!  Barry came through but I stayed to chat and I was able to help Christina with some road directions.

I also learned how to read my runner.  I’ve supported Barry on ultra-runs since his first 50 miler before we were even dating in 2009, but I had never supported him on something so long and so potentially dangerous.  The first time he ran it and pulled out at mile 52 was a scary experience.  At mile 45, he had begun to look and act very, very out of it.  His face had turned ashen.  He looked like crap and he wasn’t really making a whole lot of sense.  He had never looked like that in the middle of a run before (I do remember one race where he looked like that at the finish - the 2019 Pineland farms 50 miler where he got 3rd place) .  His two brothers were with me supporting him on this attempt and I was very relieved that his younger brother, John, decided to run the next 7 miles with him.  It was after that 7 miles that Barry fainted and fell head-first towards the ground.  To say it mildly, I wasn’t really excited when he wanted to try it again the next year.  But as I supported him over the course of the following 2 years and 3 more attempts (the one he completed it with a broken toe and the two where he pulled out at mile 83 and mile 60), I began to be able to tell when he just needed to take it easy and rest and when he needed to stop.  So when he got to mile 81 on this final (successful) FKT attempt, I was ready.  I could tell he was discouraged.  I could tell he was exhausted.  But he didn’t look dangerously unsafe.  I decided that he was giving it all he had, he wasn’t taking the expected calories and water, but I didn’t think he was medically unsafe.  That was a judgment call on my part and I didn’t make it lightly because after seeing him faint that first time, I have had horrible fears of him collapsed on the side of the trail in the middle of nowhere.  But this time, I just thought he needed encouragement.  He needed to know that he was on pace, that he was doing it, that he just needed to keep putting one foot in front of the other at a 16.5 minute/mile pace and he would finally succeed in accomplishing this amazing goal he had been shooting for since 2018.  And it worked.  He said he would have stopped if it hadn’t been for my belief in him.  Because after running that far and being that exhausted, he had lost his belief in himself.  If being married to Barry for 11 years has taught me anything, it has taught me to never underestimate him and that when the going gets tough, that is when Barry gets going.  And he did. (See pictures from his different attempts here) 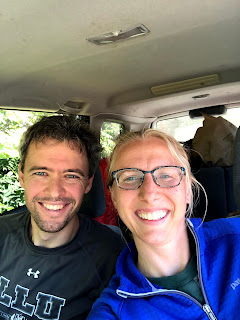 -The KI/Jo Mary forest use road map that you can get at any of the checkpoints entering the wilderness area  is invaluable.  It’s way better at showing the roads than any map you can find online.

-The GAIA GPS app works fantastic, even when you don’t have service (which is most of the time).  It shows all the roads and trails and your exact position, even if you don’t have service.   I went ahead and purchased the subscription so that I could download the area maps and know beyond a shadow of a doubt that I would be able to navigate.  However, I’ve used the free version in the past and it worked just fine.

-The Maine Gazetteer is also helpful for the few times when you need to drive off the KI/Jo Mary road map. However, if you're not in Maine much, don't worry about purchasing it. Usually you can pick up enough service somewhere on the main roads to get driving directions.

-The main logging roads that you use to access the resupply points are very well maintained and don’t require high-clearance vehicles.  There are rocks and potholes to avoid, but nothing that a smaller car can’t handle.  There are a series of connecting roads between the KI road and West Branch pond road (after whitecap) that is more remote and has a few areas where I was thankful to have a vehicle with a little more clearance.  However, careful driving in a low-clearance car probably would have worked fine too.

-Stay on the main roads unless you know for a fact that you should turn on to a smaller unmarked road.  Usually, if the road is not marked and you don’t KNOW you should be on it, than that means you should stay on the road that is obviously more traveled (Exceptions: 15 mile resupply point and connection between KI road (30 mile resupply) and West Branch pond road (45 mile resupply))

-You can expect to drive 30-45 mph on most of the logging roads if you have a decent vehicle.  But don’t underestimate the time it takes to navigate.  This time I used the GAIA GPS app to record all my driving and I drove over 300 miles (not counting travel to and from the beginning and end points) around the wilderness area getting to all the resupply points.

-The 15 mile resupply point is hard to find and not marked with any signage.  You take the Elliottsville Road off of HWY 15 just north of Monson.  After crossing Big Wilson Stream, make a left.  Continue past the bird sanctuary and the borestone mountain trailhead.  You will come down into a valley where the road gets more rough and there is clear signage saying that you are on private land (no camping, hiking allowed, etc).  Continue over a bridge and not too much farther along you will start to go up a hill just past a lovely meadow and there will be an unmarked road on your left.  Take that road - it’s probably the roughest road of the entire day but it’s not too bad if you go slow and avoid the rocks.  It goes for a ways, past otter pond (which you can’t see).  There is parking at the end and a trail that is not marked.  If you follow the main trail straight for a ways and then bear right up the mountain, it will cross the AT after about .75-1 mile.  If you turn left on the AT, you will go down towards otter creek lean to.  However, if you would like to access the AT much quicker and avoid the climb, just a short ways after the trail starts you will see a trace trail that veers off to the left.  It is marked with orange flagging and will take you to the AT at Long Pond Stream.

-The Monson general store has yummy food and is well-stocked with local goodies.  Much better than typical gas station fare.  Even found some cool 100 mile wilderness stickers there (somehow I had a feeling we might need a memento this time!)

-The shortest way to access the KI road AT crossing (mile 30) is from the North (north on HWY 15 to Greenville, right on Pleasant St/E St, past the airport, past Rum pond, past the Hedgehog checkpoint, onto KI road, and then Right towards the Gulf Hagas (not left towards head of the gulf).  The AT crosses before the Gulf Hagas parking.  OR you can access it from the south but it’s a longer drive south through Milo and Brownville and up the KI road past the KI road checkpoint.

-The back road connection from KI road (30 miles) to West Branch pond road (45 miles) cuts of SO MUCH driving time because you don’t have to go back out to HWY 11 and then up to the Jo Mary road.  Instead, head south on the KI road from the Gulf Hagas parking.  You will cross the West Branch of the Pleasant River.  There is a sharp left right after the river.  Don’t take it.  Instead continue on until the next major left.  The Ki-Jo Mary forest use map shows this clearly.  Continue up this road (some beautiful views in here) for quite a ways (don’t take the side roads) and then down into a valley and over a bridge.  After the bridge will be a sharp left turn.  It’s in this next section that the road gets a little rougher but keep going  and this will eventually drop you out right across from B Pond on what we have always called West Branch pond road.  Turn left and this will take you to the next AT crossing at mile 45.  From there you can navigate back past B pond and over to Johnston Pond Road where you will turn left again and go to the AT crossing by Crawford Pond at mile 52.  Then back out to the Jo-Mary road where you turn left to get to the last 4 supply spots.  Again, the GAIA GPS app and the Ki-Jo Mary road map will make most of this quite clear.

-There is a Hendersonville checkpoint after the Jo-Mary road crossing and before Nahmakanta lake supply.  It is usually open at night (at least it always has been when I’ve driven through) but it also has a phone that you can pick up and it will connect you with a 24 hour service that will raise the gate if for some reason it is closed.  Of note, just north of this checkpoint is a long hill where I usually get enough service on my phone to send out a few text messages.